As I purchased the perfect wedding dress, with my fiance’s mother at my side, I plotted my escape. My pending marriage wasn’t an arrangement of love, but an act of fear. I was in a physically and emotionally abusive relationship. I agreed to marry this monster as a way of buying time until I could get away.

At that time, nobody really had cell phones, there was no internet, I had no family support in my city, no friends. Nothing. Just my son and I and the abusive boyfriend I somehow picked up along the way. It certainly didn’t start out horrific. In fact, he swept me off my feet at first. I was a young single Mom with no skills and no support system whatsoever. So, he seemed to be a dream come true at the time…my knight in shining armor. He catered to my every desire and provided help that I so desperately needed. His family did too. We lived with them, afterall.

But looking back I see the warning signs. From insisting I not wear makeup, unregistering me from my college classes, ‘accidentally’ throwing away all of my yearbooks, to making my car inoperable. He was making me dependent on him, slowly but surely. And, when all of my options had been erased he began his cruel control tactics. If I as much as looked in the wrong direction he would become enraged. I remember driving in his BMW convertible one day with the top down, when he suddenly accused me of flirting with guys in a car BEHIND us. I had been looking FORWARD!!! It didn’t matter. He immediately turned around and drove out to Red Rock, where he threatened to kill me there with a boulder. He ended up changing his mind, but he sure put the fear in me with that one. I hated him and despised him for this. But, I didn’t know where to turn for help.

Finally, one morning while I was still in bed, after enduring many other episodes like this, I found the courage to say enough is enough. I let him know this wasn’t a healthy relationship for my son and I and we needed to break up. I didn’t care that I had no place to go. I would rather be homeless. He immediately grabbed a pair of scissors and made his way towards me like a madman. I was cornered and the only thing I knew to do was to try to block him from me using the bed sheets as a barrier. Thankfully he wasn’t able to cut me, but he was able to grab my hair that was peeking out at the top of the sheet and chop it to the scalp. Feeling completely helpless and in utter despair, I ran to the shower and watched as my hair proceeded to continue fall off, and slide right down the drain. I literally felt like I was dying. I felt ill. I felt worthless. I felt unlovable. I felt my spirit waning. And I felt so desperately ALONE. I was broken.

I wore a thick headband for a few months to cover the stubble on top of my head. Thank God I was able to cover that up! But, I still felt like a freak. I was embarrassed, humiliated and afraid. I had nowhere to turn. I was at my lowest point and he knew he had broken me, so it was the perfect time for him to suggest getting married. He gave me the ring, and knowing I had no other options, I reluctantly said yes. After all, I knew if I had said no, I might not be as lucky as the last time. He could have killed me, I am sure of that. I sometimes try to remember the ring, since it’s the only engagement ring that is likely to ever be on my finger. I honestly cannot recollect a single thing about it. It must have been nice though since his parent’s were jewelers. But, I obviously couldn’t have liked the ring no matter how nice it may have been since I was a caged bird as long as that thing was on my finger.

Saying yes, ended up saving my life though. My Grandmother came to town for what was to be the wedding of her only granddaughter. I knew she was my only chance for escape. I used ‘tradition’ as my way out of his sight. It’s tradition after all not to see the bride the night before, right? I begged for this, and miraculously he agreed. My son, my grandmother and I headed to her hotel room for the night and I was able to tell her the entire story. It wasn’t an hour of pouring my heart out to her before we were on the road to California. She saved my life that night, I’m sure of it.

I realize not many are as fortunate as I was to survive and make it to the other side. I was very lucky to have a grandmother who knew I needed rescuing. But had she blamed me for what was happening, I may not have survived this. Please don’t be a bystander to abuse. Be a source of support instead. It could very well save a life. There are many resources out there to provide advice on how you can safely help. I recommend learning all about your options before stepping in.

I’ve experienced other frightening episodes dating others after this too, but none quite as severe, thank God. I don’t tell many people about them though because of the stigma attached to it all. But with the #yesallwomen movement and the many stories that are pouring out because of it, I feel a responsibility of getting my own story out there, especially after posting a link to an article about it recently on Facebook and having 2 guys immediately try to shut the conversation down. This is unacceptable people! I am sharing my story in an effort to hopefully help someone, but this whole movement has also inspired me to seek out organizations, like The Shade Tree, that I can be of service to. My voice will be silenced no longer. And I encourage you all to speak out as well….not just for women, but for humanity. Let’s make a difference in our world!

Every detail of my past has led me to where I am at this exact moment. It kinda makes sense that I would be in an occupation that empowers women now, doesn’t it? 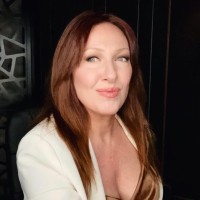 STACIE. YOU my friend hold a special place in my heart. I believe we all come into eachothers lives for a reason…Your strength and courage make you who you are today…thank you for sharing what is probably one of the most difficult times in your life. I know how hard it was to do so…but I know there are thousands of individuals, who are in the same situation and may not have the same courage and strength to do what you did. Love you Stacie and thank you for being who you are. You have empowered me and given me the strength to be who I am…my life changed when I met you and I am forever grateful. Lots of love and kisses.xoxo

You are so brave & so beautiful. I love that you are sharing your story as a way to help other women!!! What a powerful way to show that you are not a victim and that no matter how bad things seem in this minute, you CAN make a change. I have no doubt that by sharing this, YOU are the angle someone else needs like your grandmother was for you. I adore you to bits & could not be prouder to be your friend!!!

Wow! Stacie, I had no idea. You had me in tears, for sadness and for joy that you made it out! Thank you so much for sharing your story, you are a true inspiration to me, in many ways!! 🙂 ♥

Thank you SO MUCH for having the courage to share your story!!!

And thank you so much for leaving him!

I have personally witnessed women stay in abusive relationships and it breaks my heart seeing them continue on that path. It takes a lot of strength to leave when your path is so uncertain I hope this encourages other women to stand up and take the first step out of a toxic relationship!

I love you for sharing this.
What an incredible woman you are, Stacie!

I hope that your bravery will help someone else who is currently in a similar situation! It’s not a coincidence that you now are in a place in your life to have a platform to speak to so many women. Everything happens for a reason!

Stacie, I’m so grateful that you shared your story. You are such a strong woman.

O’My, friend Stacie. Who would know to look at you that you’ve endured such atrocities! You know, when I met you recently in Vegas I sensed a reserved story of some sort, a reservation to relate. I didn’t think that it could be about me / us because we do not know enough about each other to formulate opinion. I get it now and I applaud you for your incredible strength and courage and drive to survive. I admire you even more now than I did before. Thank you SO much for being so disclosed and transparent. (Did you hear me say that I admire you.) Hugs, lovely lady…you’re pretty amazing and a gift to all women.

Ha! Thanks Carolyn! Oh my goodness, when you saw me that day I was trying so hard to just hold my eyelids open! I was falling asleep in creativelive after coming there on only 2 hours of sleep from the night before! So sorry that it was so obvious I wasn’t all there! It was all I could do to stay upright at the moment we met. In fact, I left right after that. I’m glad you didn’t think it was about you though! Whew! I really felt badly that I wasn’t on top of my game that day. Hopefully we will get a chance to hang out again soon!